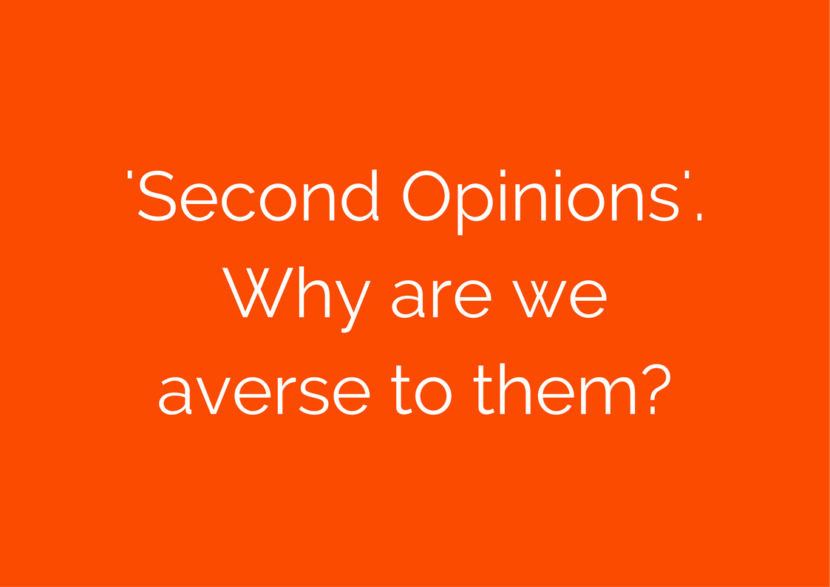 Before studying Communications at university I studied both History and Engineering Science.

Those three subjects programmed me to consider paradigms.

Different viewpoints against the hegemonic. Prevailing science changes perspectives as does history and language.

It made me try to understand the importance of discerning facts, vested interests and human nature.

So when I hear an opinion I question the science or the politics.

Years later I realised it resulted in my passion for a scientific approach to the art of marketing.

If thirty years in marketing teaches you one thing it is that words and ideas can lead people to act differently.

And that we are all susceptible.

So what have skepticism, and doctors got to do with second opinions?

A few year’s ago my father was told by ‘his’ doctor to lose weight because of ‘high cholesterol’ and a ‘pot belly’.

He kept listening to the opinion and he began to waste away trying to starve himself. The pot belly remained.

For a long time I kept asking him to see another doctor, “They’re only human” I’d say. “Get a second opinion.”

Turned out when he did see another doctor they sent him to a specialist who diagnosed the pot belly as a tumour and non-Hodgkin’s lymphoma.

Luckily he reacted well to chemotherapy treatment and is in remission, but others might not have.

I pressed him because of my skepticism.

Years earlier my Grandma was advised by her ‘trusted family’ doctor to cut fat out of her diet because she had ‘high cholesterol’.

She became paranoid about fat and the effect it could have on her heart.

We didn’t have the advantage of Google to research the causes, symptoms and adverse effects of restricting a diet to a high carb one.

After a few years, she had a massive stroke that led to her death.

I’m convinced now that the aversion to fat and a second opinion is what caused the stroke that killed her.

Doctors are analogous to other professionals.

If you were feeling ill you might go to a doctor.

If the doctor told you it was all in your mind and that by taking an aspirin you’d feel better, then you would probably trust him.

What if the aspirin didn’t work and you went back with even more pain and got the same opinion?

I’m amazed how many people do not seek a second opinion from their trusted professional: whether it is a lawyer, accountant, architect, doctor or marketer.

As professionals we rely on you trusting our training, our experience and our continuing professional development, or the latest science.

But as customers we assume all of that.

We think we are their only patient / client.

That ‘they’ have no other pressing cognitive challenges.

Why do we trust?

Human nature means if we invested trust in something we suffer a cognitive bias called the ‘endowment effect’: what we have is more valuable than the alternative.

It goes for relationships as much as assets.

Also known as ‘loss aversion’ it happens in business too.

I’m constantly amazed at the choices business people make along these lines: persisting with relationships that are based on ‘better the devil you know’, rather than seeking better value.

The relationship is a ‘sunk cost’, and there is a massive danger in sunk cost fallacy.

‘The Sunk Cost Fallacy. The Misconception: You make rational decisions based on the future value of objects, investments and experiences. The Truth: Your decisions are tainted by the emotional investments you accumulate, and the more you invest in something the harder it becomes to abandon it.’ David McRaney

In my industry, many businesses go to their creative, design, marketing, PR or advertising agency with a marketing niggle and they get what feels like brush off.

The agency through inexperience, incompetence or complacency doesn’t really listen or seek to investigate.

They don’t trust your instincts. They trust their own. “You’re worrying over nothing.”

Lets assume your advisors aren’t inexperienced or incompetent and that complacency is the issue.

Complacency is the biggest killer of invested relationships. And not getting a second opinion is complacent.

Get a second opinion.

A second opinion invests more than just a new set of eyes, ears or brains. It invests new energy and objectivity.

And the great thing about a second opinion is it costs next to nothing compared to that sunk cost.

If you’ve got a niggle, need a second opinion then please contact us.

We will give you our undivided attention.