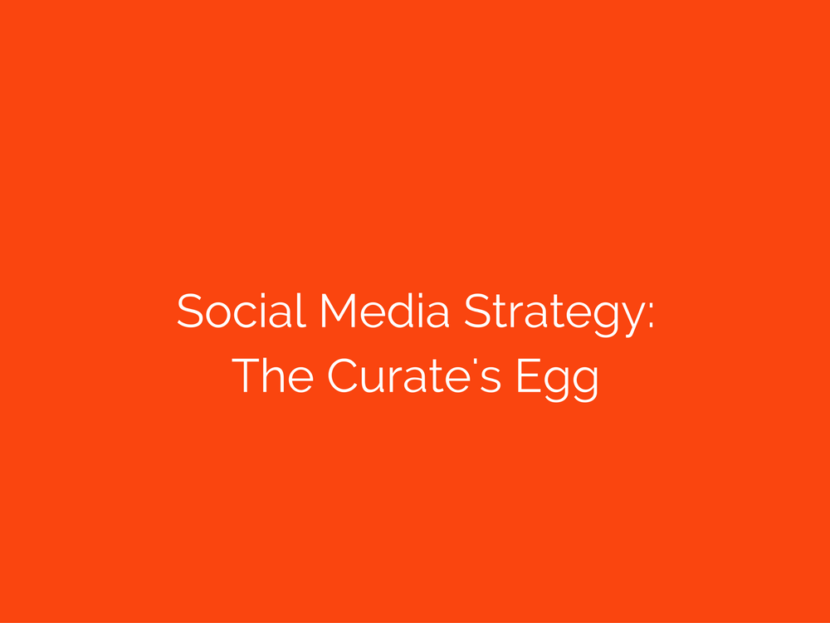 The 2015 Sensis Report ‘How Australian people and businesses are using social media’ reported that 37% of large businesses and 80% of small businesses do not have a ‘social media strategy’, with many ‘digital communications and social business strategists’ seeing this as bad news.

But like the Curate’s egg, it is both bad and good at the same time. The true picture is more complicated than headlines.

Reports from USA recently suggest that many CMOs of large businesses are scaling back the amount of investment in social channels. Their experience and evidence is that although they were quick to jump on the bandwagon, they’ve now measured the value and found it not to be as it was forecast.

Evan Ravensdale, the GM of ‘Digital Sensis’ in his Foreword says “As consumers become increasingly fragmented in how they engage with both traditional and social media, it is apparent businesses must quickly adapt their presence online to establish and nurture new communities and connect with them in authentic ways.”

But the report doesn’t substantiate or qualify why they ‘must’. Nor do those vested in ‘digital communications and social business’ discuss the bigger picture.

In the Executive Summary Sensis state.

‘The social media space continues to offer real opportunities for businesses seeking to better engage with customers and potential customers however quite a few are missing out on this opportunity by not having any presence. Businesses using social media should have a strategy and invest the necessary time, money and resources implementing it and measuring its effectiveness to maximise the benefits for them and their stakeholders.’

That’s the problem with headlines, and executive summaries: They obscure the details, which show a different story. Generalising, without uncovering the ‘why’ is dangerous. Scaremongering even.

Social Media Strategy:Is it an opportunity or has the bubble burst?

Analysing the data one at first sees that ‘social media presence’ has grown from 15% overall in 2011 to 31% in 2015. This is apparently good news. But this is an average across sectors.

The sector with the largest presence, ‘Cultural, recreational and personal services’ grew from 41% to 60% over 2011-13, but has now dropped back to 49%. A significant ‘rebalancing’ decrease.

Health and community services have rocketed from 4% to 3rd place with 42%.

‘Communication, property and business services’ also peaked at 44% last year and has collapsed to 24% this year.

‘Manufacturing’ and ‘Building and construction’ also appeared to have followed that pattern, growing and the shrinking.

This correlates to the proportion of businesses measuring ROI for social media. Although the summaries indicate a low number, it’s actually the trend that businesses have given up, especially big business. Small businesses that measure ROI have fallen from 28% to 17% in the last 4 years and large businesses from a peak of 51% in 2013 to 29% this year. So what is the ‘cause’?

One might surmise they’ve tested, and it failed to deliver the results they forecast.

More telling is that 67% of small business and 88% of large businesses found that paying to advertise on the channel effective.

Social Media Strategy is becoming more important as an advertising channel than an opportunity to engage for free.

Why has organic reach been decimated? Because the ‘free’ social channels have now developed audiences and require their shareholders be rewarded for the investments. Organic reach for business has collapsed, the value of human resource required to engage without showing an ROI has diminished and paid advertising has mushroomed.

The lack of a ‘Social Media Strategy’ is not the sign of a business necessarily ignoring the value of ‘social’; it could just be that a sophisticated marketing strategy could incorporate social as a valued tactic.

Social media is important, but it is only one weapon in the marketer’s armoury. Generalising is both dangerous and unsophisticated. The question is how do the earned, owned and paid communication channels integrate into one mutually symbiotic system to generate result. That’s a strategy.

Companies that implement Advertising, PR, Direct marketing, Exhibitions, Sponsorship, etc. do not have multiple strategies – they have one and it’s coordinated.

Asking a sophisticated brand if it has a ‘Social Media Strategy’ is banal. It shows ignorance of the meaning of the word strategy.

It’s like a Chicken farmer calling himself or herself an ‘Egg Strategist’ and bemoaning people for not having an egg strategy. Most people buy eggs to add to their meal or as an ingredient. An egg is important but not everything. You cannot live on eggs alone.